Reconciliation is the restoration of friendly relations. As reconciliation pertains to Christianity it is the restoration of friendly relations between God and humanity through Jesus Christ. This web site could show that Jesus Christ in his early life and now as seated at the right hand of God had and has a strong desire to bring restoration to all of humanity and not just a small percentage of the population. He not only had and has the desire to save all people who have ever lived, but Jesus Christ has now the ability and will be given the means to save all people by God His Father not just now, but in the ages to come. As long as humans see Jesus Christ in a favorable way, while seeing Jesus as Lord this will happen.

In considering this possible outcome it is important to know that today we know only in part and that we see through a glass or in a mirror dimly or darkly. Today our understanding of the prophetic future is childlike. We should never be arrogant about what we think we know of future events. First and foremost any wisdom that we have that is true regarding anything having to do with spiritual godliness we should be thankful for to Jesus Christ, the Son of God and God the Father.

1 Corinthians 13:9-13
9 For we know in part and we prophesy in part. 10 But when that which is perfect has come, then that which is in part will be done away. 11 When I was a child, I spoke as a child, I understood as a child, I thought as a child; but when I became a man, I put away childish things. 12 For now we see in a mirror, dimly, but then face to face. Now I know in part, but then I shall know just as I also am known. 13 And now abide faith, hope, love, these three; but the greatest of these is love. (NKJV)

Since today we spiritually know only in part and will only know fully when we see Jesus Christ face to face, it stands to reason that by putting on the mind of Christ now that we as individuals will get a better glimpse of prophetic future events. So then what is the mind of Christ? First, according to 1 Corinthians chapter 2, God reveals this wisdom to us through his Spirit, also called in the bible, the Holy Spirit. And what is the fruit or evidence of the Holy Spirit within man?

Galatians 5:22-23
22 But the fruit of the Spirit is love, joy, peace, longsuffering, kindness, goodness, faithfulness, 23 gentleness, self-control. Against such there is no law. (NKJV)

So if we truly are walking by and listening to the Spirit of God the above godly fruit should be mixed in with our thoughts and actions. And this godly fruit mixed with our desire to know when asking in prayer should give us answers, for Jesus taught as recorded in Mathew 7:7 to "ask and it will be given to you, seek and you will find". Here are some of the other verses that also teach us this or similar: Mark 11:24, Luke 11:9, John 15:7 and James 1:5. Also John 15:5-8 mixes bearing godly fruit with asking and then receiving answers from God, the Father of Jesus Christ. 7 If you remain in me and my words remain in you, ask whatever you wish, and it will be given you. 8 This is to my Father's glory, that you bear much fruit, showing yourselves to be my disciples. In further developing our godly fruit what did Jesus say about the greatest law or commandment?

And just who is our neighbor according to Jesus Christ? Is our neighbor only our fellow country men? Or is he or she only of the same race or religion that we are? Is our neighbor only some one that we go to church or school with? Jesus answers this question clearly in his parable written in Luke 10:25-37. When a person knowledgeable of the law asked Jesus, "what must I do to inherit eternal life?" Jesus answered him with a question relating to the man's own understanding, "What is written in the law?" In verse 27, he answered: "'Love the Lord your God with all your heart and with all your soul and with all your strength and with all your mind'; and, 'Love your neighbor as yourself.'"28 "You have answered correctly," Jesus replied. "Do this and you will live." But the man had another question, and asked in verse 29, "And who is my neighbor?"

Luke 10:30-37
30 In reply Jesus said: "A man was going down from Jerusalem to Jericho, when he fell into the hands of robbers. They stripped him of his clothes, beat him and went away, leaving him half dead. 31 A priest happened to be going down the same road, and when he saw the man, he passed by on the other side. 32 So too, a Levite, when he came to the place and saw him, passed by on the other side. 33 But a Samaritan, as he traveled, came where the man was; and when he saw him, he took pity on him. 34 He went to him and bandaged his wounds, pouring on oil and wine. Then he put the man on his own donkey, took him to an inn and took care of him. 35 The next day he took out two silver coins and gave them to the innkeeper. 'Look after him,' he said, 'and when I return, I will reimburse you for any extra expense you may have.' 36 "Which of these three do you think was a neighbor to the man who fell into the hands of robbers?" 37 The expert in the law replied, “The one who had mercy on him.” Jesus told him, “Go and do likewise." (NIV)

So using today's language and scenario we have a lawyer asking Jesus Christ, "who is the neighbor that I should see as an example of godly love?" And Jesus tells him about a man that recently got beaten senseless with all his money stolen and then tossed on a curb inside a city near a church. Then the local church leaders and those with the lofty title reverend all pass him by and don't help him even though they see his condition and that he is literally dying. But then a common person from a neighboring city traveling through, who just happens to be from a family with a mixture of Jewish and Moslem family members as soon as he sees the man and his condition takes pity on him and does everything he can to help him. (If you know biblical history you know that the Samaritans of Jesus' day were a mixture of Assyrian and Jewish descendents.) The traveler immediately runs to the local drug store and buys bandages and cleaning and sterilization ointment. Then runs back to where the man is lying, thoroughly cleans all his wounds and wraps bandages with first aid antibiotic cream around them. Then lifts him into his car and drives him to the nearest hospital. Then stays with him until he gets medical help. Then tells the doctors and staff to do what ever it takes for this man to recover fully and that he will pay all the hospital and doctor bills.

Then Jesus asks the lawyer, "which of the people that I have just described was a good neighbor to the man who got robbed and beaten?" The legally knowledgeable lawyer then answered, "the traveler from out of town who had mercy on him." Then Jesus told the inquisitive lawyer, "that is the example that you should follow and in doing this you should push aside any race, ethnic or religious prejudice that you might have."

If you have not yet come to this realization. How does this parable tie in with the questions that the lawyer asked, namely, "what must I do to inherit eternal life?" and "who is my neighbor?" In answering these questions Jesus stressed the importance of godly fruit and specifically in showing compassion and mercy to all people regardless of race, ethnicity and religious persuasion. This is realized because in Jesus' days on earth the Samaritans were looked down on, and often outright scorned or considered as worthless by Jesus' fellow countrymen mostly because they were a mixture of Jewish, Assyrian and other descendants. The city of Samaria was part of the nation of Israel, but the blood of the people there had been diluted by people of different races and their religious beliefs had been changed also. Ancient historical information on this is seen in 2 Kings 17 and this is clearly stated in 2 Kings 17:24. Today we have similar circumstances. All over the world today we have people from different countries, ethnicities and religious groups that according to Jesus' teachings and earthly example, we should have compassion on, especially if they too showed compassion to their fellow humans. Jesus was never a divider of mankind. He was always a uniter. Jesus even said to "love your enemies".

Matthew 5:43-48
43 "You have heard that it was said, 'Love your neighbor and hate your enemy.' 44 But I tell you: Love your enemies and pray for those who persecute you, 45 that you may be sons of your Father in heaven. He causes his sun to rise on the evil and the good, and sends rain on the righteous and the unrighteous. 46 If you love those who love you, what reward will you get? Are not even the tax collectors doing that? 47 And if you greet only your brothers, what are you doing more than others? Do not even pagans do that? 48 Be perfect, therefore, as your heavenly Father is perfect." (NIV)

From the above it is clear that Jesus wants to do good unto all of mankind and unite the world under his love and compassion. Yes, that would include being the savour of all mankind and not just a small percentage of the population. The apostle Paul, who Jesus Christ changed from being hateful while persectuting the followers of Him, to being an apostle and follower of Jesus Christ is an example of this change of mankind through the Lord Jesus Christ. In Romans 14:11 Paul teaches that Jesus said that "every knee will bow before me; every tongue will confess to God". See also Philippians 2:5-11. It is only with this that Jesus Christ becomes the savior of all humanity. On this biblical web site titled, "Christian Reconciliation", we are going to examine if Jesus has or will have the means to accomplish His goal. That of reconciling all of humanity to God by Jesus' life, death, resurrection and Lordship. 2 Corinthians 5:16-21

God bless you richly. I hope you enjoy this biblical education web site with its teachings on Christian reconciliation through Jesus Christ and with God's help learn a lot. 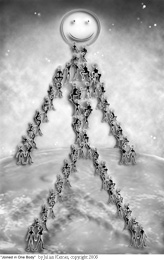 If God Could Save Everyone - Would He?

The Biblical Teaching of Hell

The Myths of Hell

Age and the Greek Words Aion and Aionios

The Lake of Fire

The Recognition of Universal Reconciliation

A Short History of Universal Reconciliation